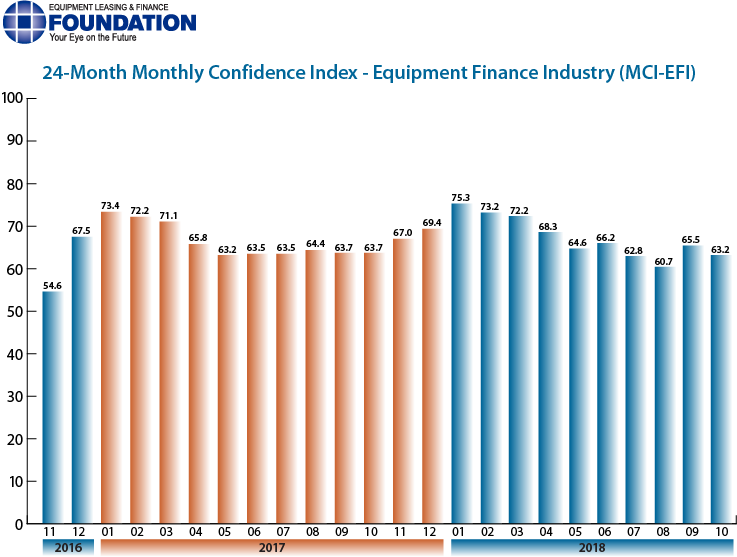 The Equipment Leasing & Finance Foundation (the Foundation) releases the October 2018 Monthly Confidence Index for the Equipment Finance Industry (MCI-EFI) today. Designed to collect leadership data, the index reports a qualitative assessment of both the prevailing business conditions and expectations for the future as reported by key executives from the $1 trillion equipment finance sector. Overall, confidence in the equipment finance market eased in October to 63.2, a decrease from the September index of 65.5.

When asked about the outlook for the future, MCI-EFI survey respondent Harry Kaplun, President, Specialty Finance, Frost Bank, said, “Business optimism is apparent in all sectors, which leads to more capital spending. While there is some caution with large expansions, most companies are willing to spend on equipment to grow.”

Bank, Middle Ticket
“The fourth quarter will be a good barometer to how our customers are using tax reform to manage their tax positions. We expect that many customers will be advised by their tax advisors to increase their use of leasing resulting in an increase in year-end purchase leaseback activity.” Michael Romanowski, President, Farm Credit Leasing Services Corporation

Bank, Middle Ticket
“A change in a congressional majority in the upcoming mid-terms will make decision making at the federal level go from frantic to inoperable.” Adam Warner, President, Key Equipment Finance

MARKET SEGMENTS BASED ON TRANSACTION SIZE OF NEW BUSINESS VOLUME