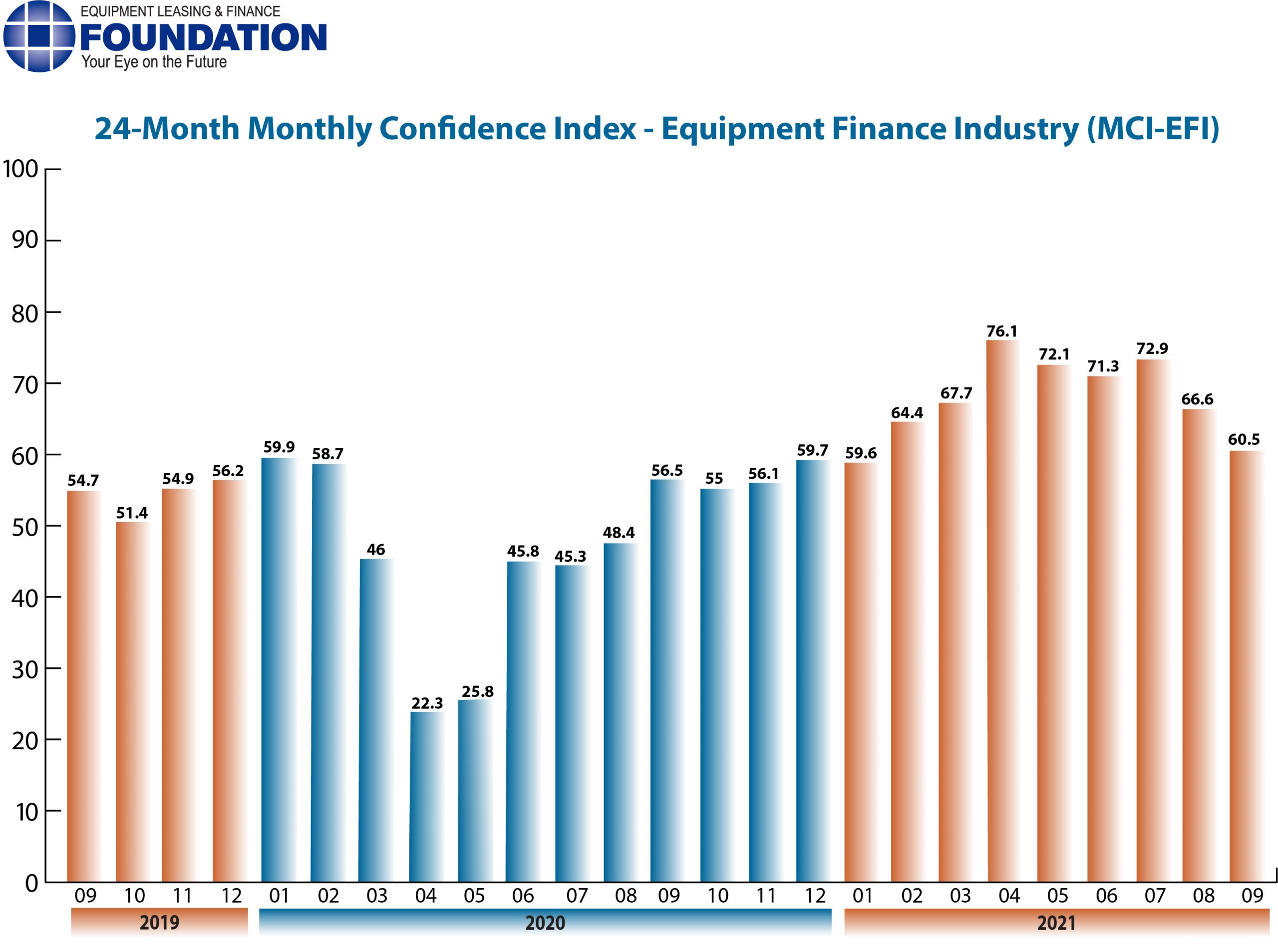 The Equipment Leasing & Finance Foundation (the Foundation) releases the September 2021 Monthly Confidence Index for the Equipment Finance Industry (MCI-EFI) today. The index reports a qualitative assessment of both the prevailing business conditions and expectations for the future as reported by key executives from the $900 billion equipment finance sector. Overall, confidence in the equipment finance market is 60.5, a decrease from the August index of 66.6.

When asked about the outlook for the future, MCI-EFI survey respondent Bruce J. Winter, President, FSG Capital, Inc. said, “The delta variant is causing some slowdown in certain sectors which will delay, but not derail the recovery of these industries. Other sectors that have seen strong demand but were unable to fulfill all orders due to severe labor shortages are optimistic more workers will return now that the federal unemployment bonus has expired. We expect a robust fourth quarter and are optimistic the momentum will continue into early next year. Future inflation remains the great unknown, and the outcome of the proposed $3.5 trillion infrastructure bill will be a key determinate in whether we experience only short-term inflation or several years of inflation well above the Fed’s target rate.”

“There is great interest in capital expansion in the industries we serve. Supply chain issues continue to delay equipment and the completion of projects. We will see this continue into next year and it will have an impact on when transactions end up on the books.” Michael Romanowski, President, Farm Credit Leasing

“We always believe that secured equipment loans and leases will outperform all other asset classes; however, the last few months have created some concern among our customers. The shortage of labor, skilled or otherwise, has become problematic. Uncertainty with prospective polices coming out of Washington that could increase costs of doing business has slowed decision making ahead of any conclusion. Persistence of COVID variants and potentially renewed mandates and restrictions create even more uncertainty. While we try our best not to worry about what we cannot control, this environment feels unprecedented. Until we have clarity on a number of these concerns, we think the rest of this year and into 2022 will be somewhat choppy.” Dave Fate, Chief Executive Officer, Stonebriar Commercial Finance