This comprehensive report analyzes global and domestic trends impacting capital spending and economic growth in the coming year. It identifies signposts specific to the equipment finance industry and highlights key verticals, featured in the monthly Momentum Monitor, that identify turning points in their respective investment cycles. Each economic outlook is updated quarterly. 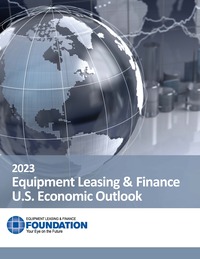 Equipment and Software Investment: Equipment and software investment growth boomed in the second half of 2022, providing a solid jump-off point for what will likely prove to be a more challenging year for both the economy and industry in 2023. Rising interest rates are expected to weigh on E&S investment growth next year, though several factors should help to cushion the blow of a looming recession on the equipment finance industry.

Momentum Monitor: As was the case last quarter, most Momentum Monitor verticals are peaking or weakening. High interest rates and slowing global growth have weighed on several verticals, including agriculture equipment and industrial equipment.

Manufacturing: The manufacturing sector continues to outperform expectations given rising interest rates and the global economic slowdown. Though activity appears likely to slow in 2023 given the heightened possibility of sluggish economic growth or an outright recession, optimists can point to recent pro-industrial legislation and a push for supply-chain re-shoring, both of which should give the manufacturing sector a boost this year.

Small Businesses: Main Street business owners continue to express pessimism about their prospects in 2023, and the combined effects of high inflation and tightening financial conditions are likely to contribute to turbulent operating conditions this year. Fortunately, financial stress is still quite low and Main Street lending activity remains positive, at least for now.

Fed Policy: Monetary policy is among the biggest question marks facing the industry this year. Fed officials have hinted at the possibility of slowing down rate hikes while stressing that the Fed remains committed to reining in inflation — even if doing so leads to higher unemployment or a recession. We believe rates will rise above 5% in 2023, and potentially higher.

U.S. Economy: Though GDP bounced back during the second half of the year, underlying economic conditions remain troubling. Consumers continued to spend, but credit card debt is soaring and the savings rate is near an all-time low. The labor market remains strong, but the Fed’s goal of driving down inflation is likely to push unemployment up. Elsewhere, the housing market is struggling, financial markets are highly volatile, and the global economy is slowing.

While we believe a soft landing is still possible, our best case for 2023 is a mild recession starting in the second quarter. 2023 will be a tougher year for the equipment finance industry.