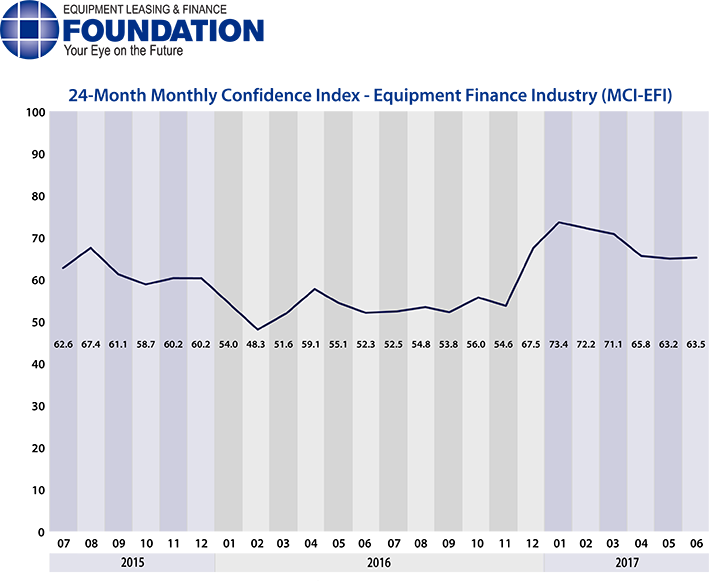 The Equipment Leasing & Finance Foundation (the Foundation) releases the June 2017 Monthly Confidence Index for the Equipment Finance Industry (MCI-EFI) today. Designed to collect leadership data, the index reports a qualitative assessment of both the prevailing business conditions and expectations for the future as reported by key executives from the $1 trillion equipment finance sector. Overall, confidence in the equipment finance market remained steady in June at 63.5, relatively unchanged from the May index of 63.2.

When asked about the outlook for the future, MCI-EFI survey respondent Valerie Hayes Jester, President, Brandywine Capital Associates, said, “Our business volume remains steady, but it is not on pace to exceed last year’s numbers. We see larger companies moving ahead and making capital investments but the smaller businesses seem to be more worried about the instabilities in Washington. The optimism of Wall Street is not shared by Main Street. Portfolio performance remains strong but certainty needs to return to the environment of the average small business owner before investment of a growing scale returns.”

Depending on the market segment they represent, executives have differing points of view on the current and future outlook for the industry.

“The cash grain sector of the agriculture industry continues to experience a rebalancing resulting in pull back in new capital investment. Other agriculture sectors are also impacted as they work through down cycles. Some sectors—swine, poultry, nuts and wine producers—are engaged in growth activities resulting in finance opportunities.” Michael Romanowski, President, Farm Credit Leasing Services Corporation

The fundamental health of the business community and consumer participation are positives for the near term. The risk to the economy is the political climate and uncertainty it is creating in various industries dependent upon trade, tourism, and policies that support growth.” Paul Menzel, CLFP, President and CEO, Financial Pacific Leasing, Inc., an Umpqua Bank Company

“The economy appears to be moving along at a good pace. Uncertainty in Washington and lack of momentum around tax policy could impact capital spending in the second half of the year.” Thomas Partridge, President, Fifth Third Equipment Finance