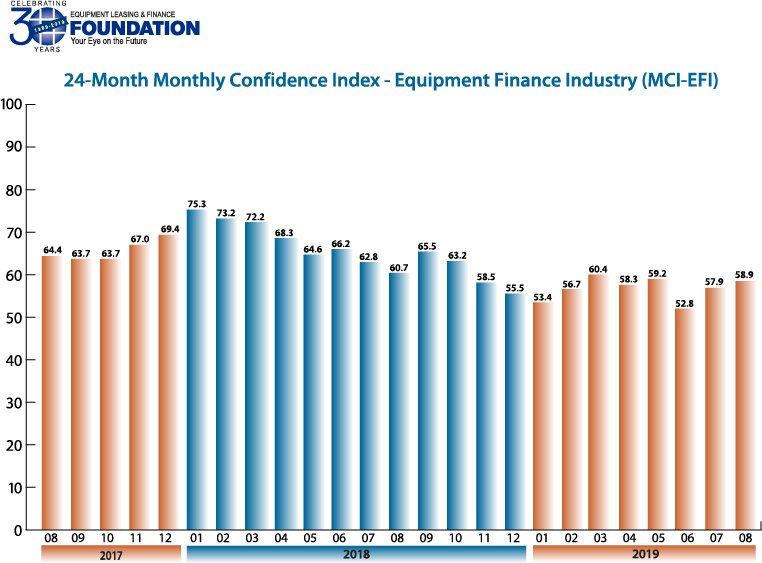 The Equipment Leasing & Finance Foundation (the Foundation) releases the August 2019 Monthly Confidence Index for the Equipment Finance Industry (MCI-EFI) today. Designed to collect leadership data, the index reports a qualitative assessment of both the prevailing business conditions and expectations for the future as reported by key executives from the $1 trillion equipment finance sector. Overall, confidence in the equipment finance market is 58.9, an increase from the July index of 57.9.

When asked about the outlook for the future, MCI-EFI survey respondent Valerie Hayes Jester, President, Brandywine Capital Associates, said, “All indicators point to the continued strength of the economy in spite of trade and tariff wars. The recent drop in the fed funds rate continues to put the spotlight on rates and historically low margins. As certain sectors of the economy are affected by policy changes, we could experience changes in equipment finance demand.”

“I’m optimistic that it seems neither businesses nor consumers are over-leveraged. I’m concerned that talk of recession is making businesses pull back, creating a self-fulfilling prophecy.” Quentin Cote, CLFP, President, Mintaka Financial, LLC

“We do not expect significant new investment by our customers until trade issues are resolved.  Customers are being extremely cautious with new investment opportunities.” Michael Romanowski, President, Farm Credit Leasing