Orlando, FL—October 23, 2017— A new study conducted by the Equipment Leasing & Finance Foundation and PayNet, Inc., “The State of Credit Quality: Where We Have Been and Where Are We Going,” shows industry credit quality and performance remain strong and better than pre-recession levels. This study points towards continued better-than-historic average performance due to the economic outlook, improved underwriting and portfolio management, and better credit quality originations booked since 2010.

“Though intense competition and the length of time since the Great Recession are beginning to affect credit standards, this study shows very clearly that even if a recession were to occur, the equipment finance industry would experience significant lower default and loss rates than those seen in the Great Recession,” states Thomas Ware, PayNet’s Senior Vice President and an incoming Trustee of the Equipment Leasing & Finance Foundation, and the new Chairman of its Research Committee. “The weaker borrowers were wiped away by the recession, and both borrowers and lenders have since been more cautious, resulting in much higher portfolio quality today.” 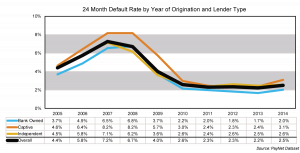 “There is a remarkable improvement in the quality of originations from 2005 to 2016,” notes William Phelan, president of PayNet, Inc. “The results indicate that the equipment finance industry has fully recovered from the impact of the Great Recession, with expanding origination and portfolio volumes.”

PayNet will provide insight at the Equipment Leasing and Finance Association’s 56th Annual Convention on Monday, October 23 at 11 a.m. in a breakout session, “Risk and Assets: An Overview and a Balanced View,” at the JW Marriott Orlando Grande Lakes.

The full study The State of Credit Quality: Where We Have Been and Where Are We Going can be downloaded at: https://www.store.leasefoundation.org/cgi-bin/msascartdll.dll/ProductInfo?productcd=CREDIT2017

Defaults are defined as any default indicator, 90-day delinquency, equipment repossession, bankruptcy or related public record indicator reported in the PayNet database occurring within 24 months from booking date. All default rates in this study are determined using counts. See PayNet Dataset methodology in the Appendix for a detailed default definition.

ABOUT THE EQUIPMENT LEASING & FINANCE FOUNDATION

The Equipment Leasing & Finance Foundation is a 501c3 non-profit organization dedicated to inspiring thoughtful innovation and contributing to the betterment of the equipment leasing and finance industry. The Foundation is funded through charitable individual and corporate donations. Learn more at www.leasefoundation.org.