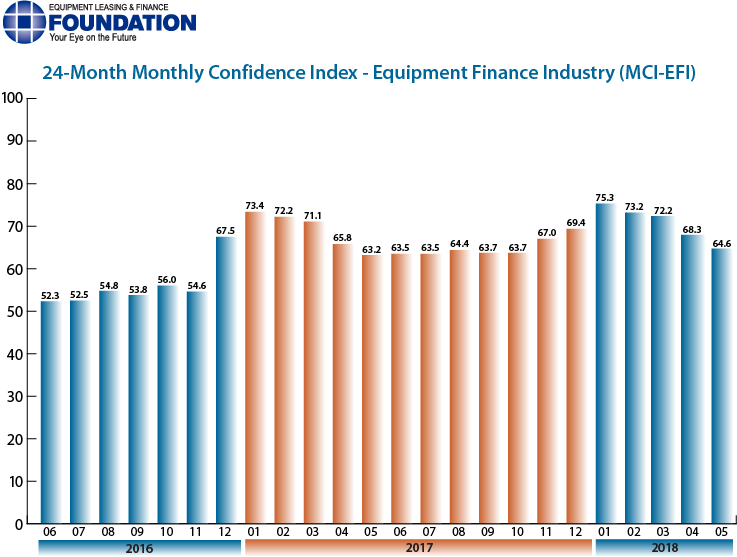 The Equipment Leasing & Finance Foundation (the Foundation) releases the May 2018 Monthly Confidence Index for the Equipment Finance Industry (MCI-EFI) today. Designed to collect leadership data, the index reports a qualitative assessment of both the prevailing business conditions and expectations for the future as reported by key executives from the $1 trillion equipment finance sector. Overall, confidence in the equipment finance market eased further in May to 64.6, down from the April index of 68.3.

When asked about the outlook for the future, MCI-EFI survey respondent Michael Romanowski, President, Farm Credit Leasing Services Corporation, said, “Customers are continuing to work through the impacts of tax law changes and making decisions on how best to finance capital investments. Projects are beginning and we anticipate an increase in purchase leaseback activity in the last quarter of the year.”

“Demand is strong this spring. Small business seems determined to move forward and to keep investing in equipment that will produce income. In spite of the manic performance of Wall Street and the ongoing drama in Washington, Main Street America continues to stay the course.” Valerie Hayes Jester, President, Brandywine Capital Associates